Fun, good sportsmanship, and teamwork are the guiding principles of Hingham Youth Soccer.

Goalkeeping duties should be shared.

The referee (or Coach acting as referee) will control the field of play with the appropriate calls; assistant coaches and/or parents may help with the out of bounds if asked by the referee, but the referee has the final call.

Coaches, players and spectators should be along the SIDELINES during games, not at the endlines.

In the Junior and Senior Divisions, parents and spectators should be on one sideline, with coaches and players on the opposite sideline of the playing field.

Parents should NOT direct play, call out to players, or address the referee from the sidelines at any time.

Coaches should primarily communicate with their players while the players are resting on the sidelines, not during the game/scrimmage.

No SLIDE TACKLING is permitted 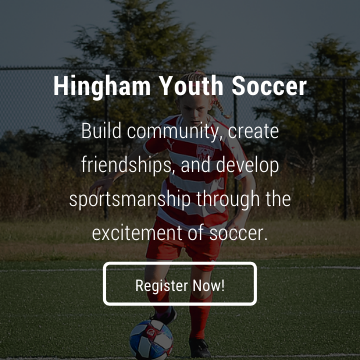